iVascular’s first open innovation initiative, innoVasc, is pleased to announce the winner of the grant.31 October 2019 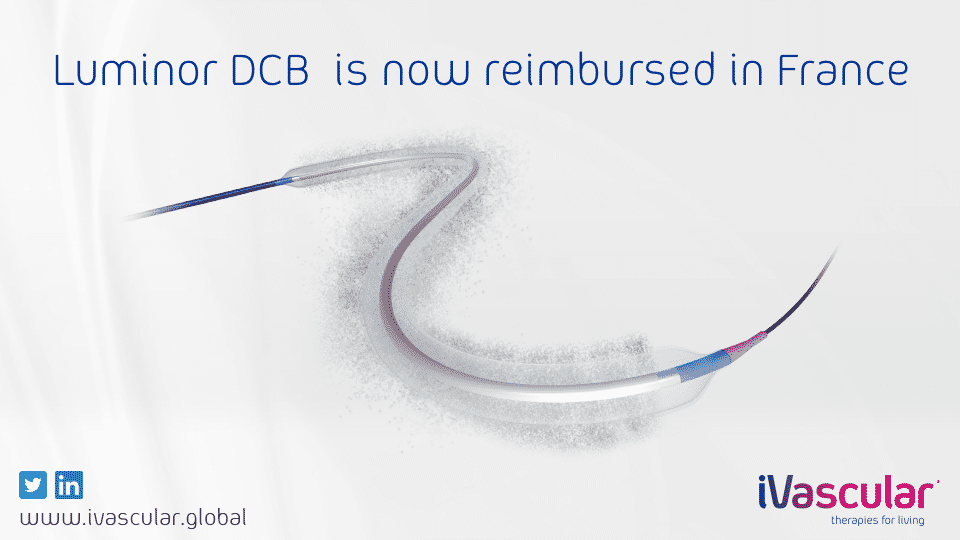 iVascular France is pleased to announce that luminor 18 and luminor 35 DCBs, are now listed on the French LPPR list for de-novo lesions of the femoro-popliteal arteries.

luminor is a paclitaxel coated balloon specifically designed for dilatation of stenosis located in the iliac, femoral, iliofemoral, popliteal, infrapopliteal and renal arteries, as well as for the treatment of obstructive lesions of arteriovenous fistulas, whether original or artificial.

Prof. Eric Ducasse (CHU Bordeaux, Vascular Surgery Unit, France) has been one of the first Luminor user in France: “luminor is the first paclitaxel DCB reimbursed in France since the Katsanos’s publication. It underlines that French authorities do trust its last generation coating technology, which is unique and has demonstrated efficacy, and above all, safety. I am confident that French use and data analysis will confirm it shortly.”

The latest EFFPAC trial 2-year outcomes with Luminor, have shown outstanding results in terms of primary patency (90.2%) and freedom from TLR (97.2%) in the superficial femoral artery and popliteal artery for TASC A and B lesions. This trial is also showing no increased risk of death detected at 2-years, (1 death in the DCB group vs 2 deaths in the POBA group), evidencing a relative risk (RR) of 0.48. Prof. Ulf Teichgräber (University of Jena, Germany) and Dr. Koen Deloose (AZ St Blasius, Dendermonde, Belgium), have been discussing latest data during CIRSE 2019.

The unique iVascular proprietary coating nanotechnology, TransferTech, differentiates Luminor DCB. It uses the Paclitaxel in a microcrystalline molecular structure, that is spread on the balloon together with the excipient, by ultrasound spray pulse.

The balloon surface is covered with multiple and independent nanodrops layers, providing a flexible coating that adapts to the balloon movement and ensure paclitaxel to be released in the target lesion without particle loss in the blood flow.

iVascular S.L.U (www.ivascular.global) is a fast-growing company based in Barcelona that has developed exclusive technologies in a vertically integrated project to innovate and produce coronary and endovascular devices from basic raw materials to the final device or implant, including DCB, DES, SE nitinol stents, CoCr Bare Metal Stents, thrombus extractors and angioplasty balloons.